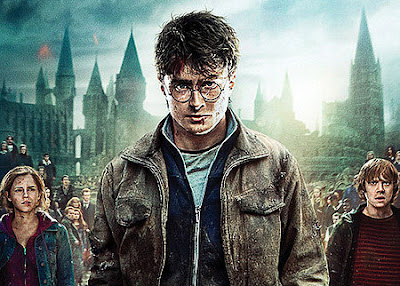 Blogpost by JFCY volunteer Bilal Manji (McGill undergrad)
With the final instalment of the Harry Potter saga hitting theatres this past weekend, Potterites worldwide bid farewell to a hero they have come to love for more than a decade. Quidditch, patronuses, the Cruciatus Curse, Platform 9 and 3/4 – all elements of J.K. Rowling’s wizarding world, have captivated children and adults alike since the release of the first book in 1997. In Deathly Hallows, Harry Potter finds himself Undesirable No. 1, a fugitive of the law, as the government of the wizarding world has been taken over by the evil Lord Voldemort. This is not the first time that Harry has found himself at odds with Wizarding Law. Let’s explore the Potter legal system in more detail - what are its main tenets, is it comprehensive and what are its flaws?
The source of all laws in the Wizarding World is the government, the Ministry of Magic. The Ministry is officially an arm of the British government, although the British government has no jurisdiction in the Ministry’s affairs.  The Ministry was established in the latter 17th century by the International Confederation of Wizards. Prior to the formation of the Ministry, persecution of wizards was growing fiercer in the Muggle world. For this reason, in 1692, the Confederation decided that the wizarding world would remove itself from contact with the Muggle world, by passing the International Code of Wizarding Secrecy. The ministries of every country subjected themselves to this Code, and it is perhaps the most important law in the entire wizarding world. 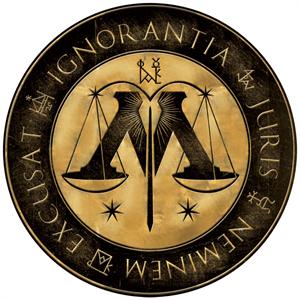 Harry is subject to the British Ministry of Magic, which is headquartered in an underground facility in London. Every nation has its own Ministry of Magic or equivalent. The Ministry of Magic is headed by the elected Minister of Magic (presently Kingsley Shacklebolt).  The Ministry is composed of at least seven departments.  There is no separate legislative body; the wizarding world seems to follow an administrative law system with most of the laws coming in the form of regulations from the various departments. For example, the Muggle Protection Act was partially written by Arthur Weasley as the head of the Improper Use of Magic Office.
In both the Chamber of Secrets and Order of the Phoenix, an underage Harry performs magic in the presence of a Muggle. In doing so, he violates both the Statute of Secrecy and the Decree for the Reasonable Restriction of Underage Sorcery (1875). Harry is issued a written warning for Mafalda Hopkirk of the Improper Use of Magic Office in the Chamber of Secrets. However, since his offence is more serious in the Order of the Phoenix (releasing a patronus to protect his Muggle cousin from Dementors), he is ordered to appear before a formal hearing at Wizengamot (Wizarding Court).
The High Court of wizarding Britain is known as the Wizengamot, which consists of a panel of wizards and witches (collectively known as the Wizengamot or sometimes the Council of Magical Law). This panel presides during trials in one of the courtrooms on Level 10 of the Ministry of Magic. It is not known if lower courts exist and the Wizengamot constitutes a sort of Supreme Court, or if this is the only court system. It seems like the latter is the case, as the Wizengamot summon Harry directly for a hearing. The Wizengamot Charter of Rights grants the accused the right to call witnesses and be represented by another person, although the books do not mention any lawyers.

The Wizarding World also seems to have a fairly sophisticated punishment system. In terms of dealing with underage wizards that conduct magic, a written warning is issued for first offences. A second offence results in the expulsion of the wizard from school, the destruction of his wand, and the wizard is no longer allowed to use magic. More serious crimes result in imprisonment in Azkaban, which is guarded by Dementors. An even more severe punishment is the Dementor’s Kiss. Sirius Black was sentenced to this punishment without the benefit of a trial. In a Dementor’s Kiss, a Dementor clamps its jaw on the mouth of the victim and sucks out his soul.
We have reviewed the main tenets of Wizarding Law – the government, some important laws, the Winzengamot and punishment. The legal system is full of loopholes, is at times both corrupt and incompetent and there seems to be a complete disregard for due process. Thankfully for us Muggles, our legal system is more comprehensive!  Check out the scene from the Order of the Phoenix of Harry’s trailer at Wizengamot here!
Posted by Justice For Children and Youth (JFCY) at 7:50 PM

This Blog site is for educational purposes only - to give general information and understanding of the law in Ontario, Canada. It is not to provide specific legal advice.

By using this Blog site you understand that any statement on the blog site are solely those of the author and do not reflect the views of Justice For Children and Youth (JFCY).

The Blog should not be used as a substitute for legal advice from a lawyer. This blog is not published for advertising or solicitation purposes.